During paint jobs, surface preparation tends to play second fiddle to the coating itself. But your choice of abrasive matters more than you think. From speed and safety to dust and disruption, your abrasive doesn't just affect the coating; it also directly impacts your facility's productivity and profitability. The right abrasive can minimize downtime. A poor-quality abrasive can cause it.

Waste slag has long been the go-to blasting abrasive. But new OSHA regulations and a shift toward fixed-price bidding have maintenance teams searching for a safer, more productive abrasive. While metallic abrasives and aluminum oxides are efficient, their price tags don't make them viable for general maintenance. Garnet's balance of affordability and quality has made it a top choice for industrial teams seeking safer, more productive abrasive blasting.

Should you use waste slag or garnet abrasives for surface preparation?

Blasting abrasives might not be at the top of your priority list, but they could be the secret to breaking through your 98.5% uptime plateau. If your blasters are using waste slag, use this side-by-side comparison to ensure you're making the best choice for your facility and your coatings job. 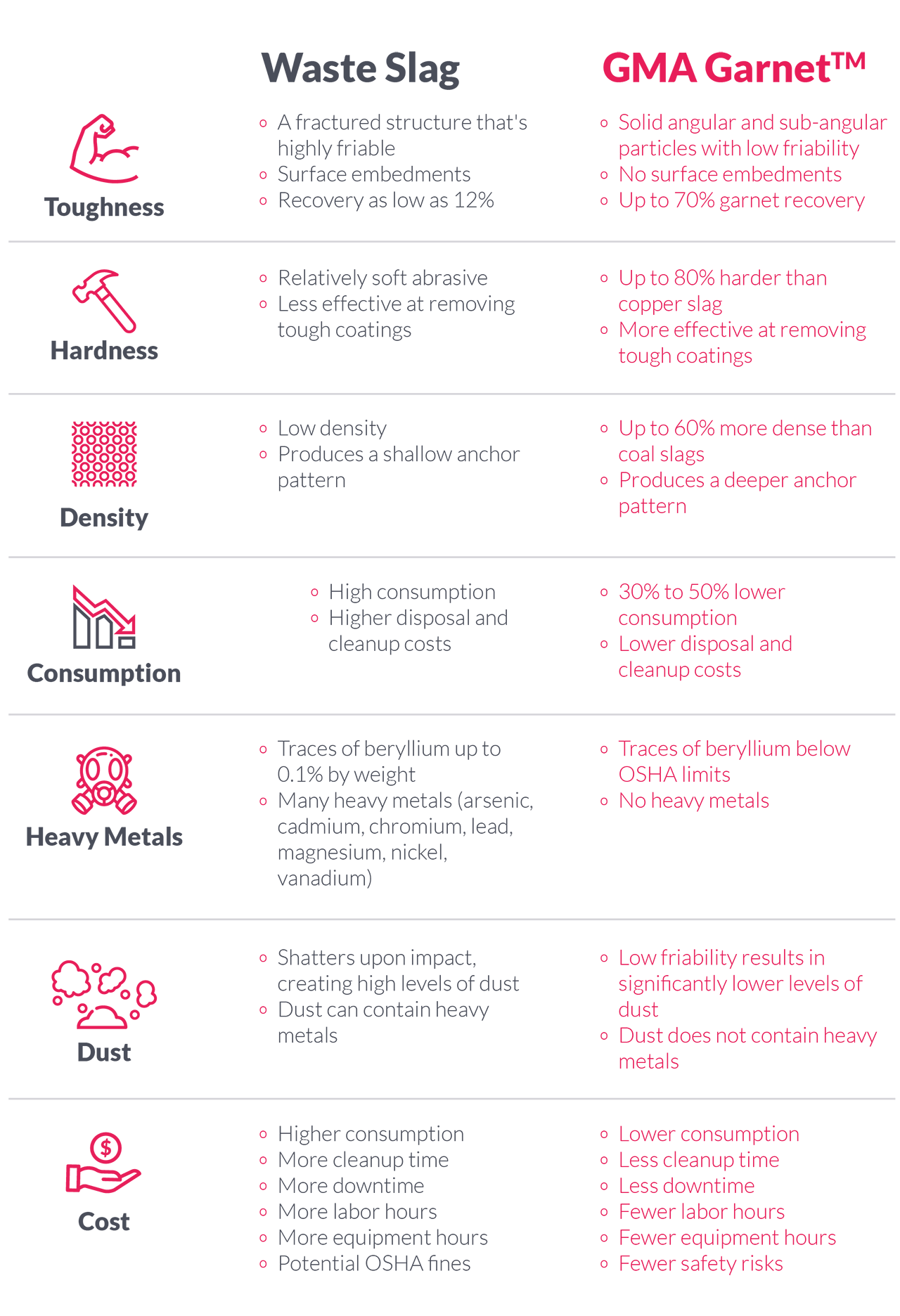 Your blasting abrasive must produce the surface profile required by your industrial coating. Toughness, hardness and density all directly impact an abrasive's ability to perform the task. The harder the abrasive, the more effectively it removes tough coatings and creates an anchoring profile. The tougher the abrasive, the less likely it is to shatter upon impact. Tougher abrasives produce a higher surface profile faster. Density affects productivity by enabling a deeper anchor pattern.

Waste slag: Relatively soft, brittle abrasives, waste slags shatter upon impact. Slags always produce a degree of embedment, which prevents a surface from being truly clean, and are prone to poor grading. This produces erratic surface profiles that must be filled in or evened out with your coating.

Garnet abrasives: GMA Garnet™ is three times harder than coal slag, which makes it ideal for removing tough coatings. Unlike waste slags, garnet is inherently tough, enabling it to cut more effectively and produce a clean surface without embedment. Because garnet produces the required finish via velocity, not particle size, it gets the job done faster and produces a more even-textured surface.

The amount of abrasive you need to achieve the desired surface preparation is critical to the overall cost of your job. Consumption can also cause productivity killers such as lengthy disposal processes and dust. (The latter of which is so critical that we've devoted a separate section to it below.)

Garnet abrasives: By switching from waste slag to a garnet abrasive, maintenance teams reduce their consumption by 30%. With the proper metering valve adjustments, consumption can decrease even more—up to 50% in some cases.

Summing it up: Maintenance teams can reduce consumption by 30% to 50% by switching from waste slags to garnet abrasives. By getting the job done with less, teams also reduce disposal and cleanup, allowing a facility to get back to productivity faster.

For many maintenance managers, dust has become such an issue that it's standard practice to take other trades off their jobs as blasters do theirs. Although no abrasive blasting is truly dust-free, your choice of abrasive has a drastic impact on dust and disruption in your facility. Simply put, more consumption means more dust.

Waste slags: Waste slag is highly friable, breaking into fine particles upon impact. Because of this quality, it is notorious for producing high volumes of dust. In some cases, blasting with waste slags produces so much dust that offshore maintenance is nearly shut down during the blasting process. Dust leads to visibility issues, contamination and other critical safety hazards.

Garnet abrasives: Garnet has low friability, which means it produces considerably less dust than waste slag. With heavy, tough garnet, it requires less pressure to blast. This makes it easier to control what dust is produced and avoid facility-wide contamination. With garnet abrasives, other trades can continue their work without visibility issues—a major boost to productivity.

Summing it up: Garnet is the closest thing to dustless blasting. Because of its inherent toughness, it causes less dust, contamination and facility disruption than waste slag.

You can't eliminate abrasive blasting altogether, but you can choose abrasives that pose less safety risk. In addition to dust and contamination, toxicity is key to assessing the quality of your blasting abrasive.

Waste slags: Waste slag abrasives can contain traces of beryllium up to 0.1% by weight, plus heavy metals such as arsenic, cadmium, chromium, lead, manganese, nickel and vanadium. These toxic metals are released into the air upon impact, often greatly exceeding the highest legal levels.

Garnet abrasives: Garnet abrasives can contain trace amounts of beryllium, but these are below the limits set by OSHA. Because garnet isn't a byproduct of burning coal and/or producing metals, it doesn't contain the highly toxic metals prevalent in waste slags.

Summing it up: Garnet is within OSHA's limits for beryllium and doesn't contain the toxic heavy metals found in waste slags. By blasting with garnet, maintenance teams can maximize safety without sacrificing performance.

It's tempting to think of abrasive costs in terms of material alone. But speed, cleanup and disruption all factor into a blasting abrasive's affordability (or lack thereof).

Summing it up: Whether recycled or used just once, garnet's speed, efficiency and lower disposal costs make it a cost-effective abrasive.

In today's industrial landscape, there's no time for waste slag's dust, disruption and downtime. That's why maintenance teams around the globe are using GMA Garnet™ to get the job done right. Let's talk about your coatings jobs and how garnet abrasives can help your facility maximize uptime.

Selecting the Right Equipment to Optimize Your Waterjet Cutting Process

END_OF_DOCUMENT_TOKEN_TO_BE_REPLACED

Subscribe to our e-newsletter for the latest news and events at GMA.